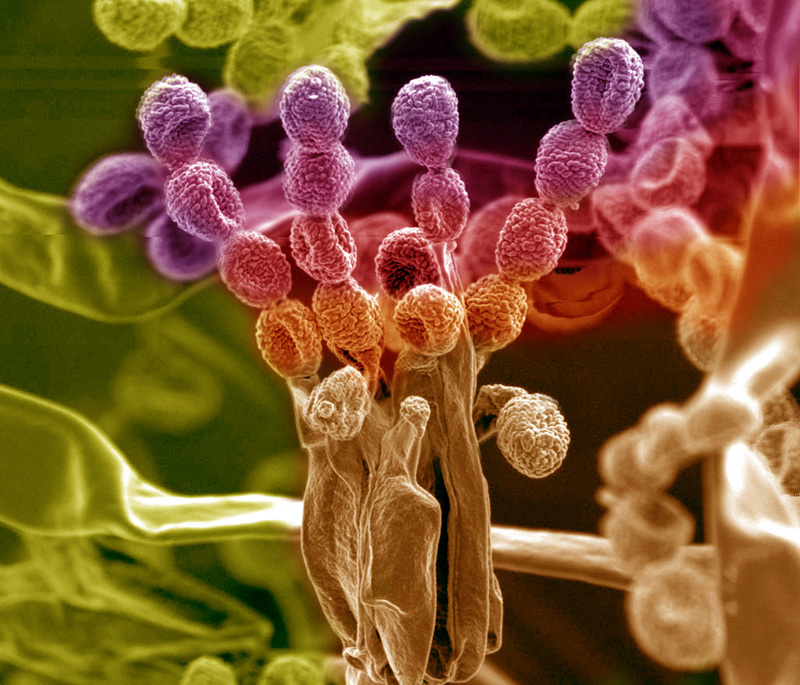 The spores of an opportunistic soil fungus, Penicillium sp.. PNNL

In 1994, scientists at the Pacific Northwest National Laboratory moved soil from moist, high-altitude sites to warmer and drier places lower in altitude, and vice versa. In 2011, they returned to the sites and looked again at the soil microbes and found that they had done little to adapt functionally to their new home. That’s a bad sign, experts say, for a world convulsed by a changing climate.

“These microbes have somehow lost the capacity to adapt to the new conditions,” said Vanessa Bailey, one of the authors of the study, published this month in PLOS One. That not what scientists anticipated, and it “calls into question the resilience of the overall environment to climate change,” she said. “Soil is the major buffer for environmental changes, and the microbial community is the basis for that resilience.”

As snow and ice melt, it’s fairly straightforward to grasp what climate change means for the future of, say, polar bears in the Arctic or penguins in Antarctica. But it’s far more difficult to understand what is happening to the planetary microbiome in the earth’s crust and water, a quadrillion quadrillion microorganisms, according to Scientific American. Yet it is far more important, for microbes run the world. They are key players that perpetuate life on the planet, provide numerous ecosystem services, and serve as a major bulwark against environmental changes.

Researchers say that as the planet warms, essential diversity and function in the microbial world could be lost.

But they can also cause serious problems — as the world’s permafrost melts, microbes are turning once-frozen vegetation into greenhouse gases at a clip that is alarming scientists.

As vital as they are, we are only beginning to understand microbes and the role they play in the world’s ecosystems. The problem is that these fungi, archaea, and bacteria are so small that in a gram of soil (about a teaspoon), there are a billion or so, with many thousands of species. Perhaps 10 percent of the species are known. The Lilliputian communities that these microorganisms create are enormously complex, and their functions difficult to tease out. But in the last decade, new tools have been developed that have begun to change the research game.

“Soil was a black box,” said Janet Jansson, chief scientist for Biology Earth and Biological Sciences at the Pacific Northwest National Laboratory and president of the International Society for Microbial Ecology. “I have been working in microbial ecology for decades, and it has been difficult, if not impossible, to study them. Now we have these new molecular processes, and suddenly the whole field is exploding.”

There is a Manhattan Project-like urgency to sussing out these secrets. A paper in the journal Science last year called for a Unified Microbiome Initiative, and experts have held a series of meetings about it at the White House. The Earth Microbiome Project is a massive global effort to collect samples of microbial communities from thousands of ecosystems around the world. Meanwhile, the Global Soil Biodiversity Initiative got underway in 2011 — one-third of the world’s biodiversity lives beneath our feet — and it’s focused on preserving the services that healthy soil ecosystems provide, such as a place for plants to grow, the breakdown of waste, and the natural filtration of water. The TerraGenome Project is sequencing the metagenome of soil microbes. 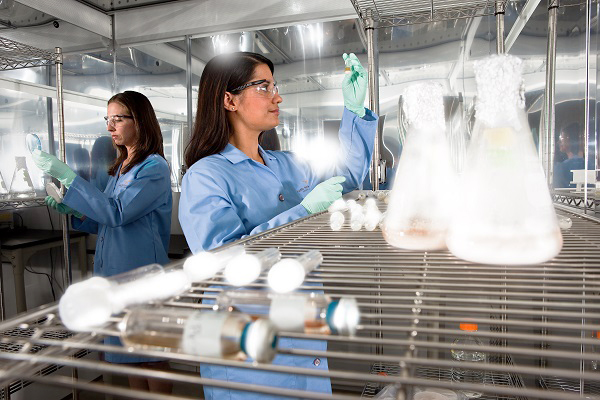 And Jansson’s project, Microbiomes In Transitions, is studying how “perturbations” — disruptions such as climate change and pollution — affect both the microbiomes around us and inside of us. “It’s extraordinarily evident that bacteria, fungi, and viruses play a massive roll in the development of health and disease in humans, and in environmental settings and ecological systems,” said Jack Gilbert, a microbial biologist at Argonne National Laboratory and a founding member of the Unified Microbiome Initiative.

The new tools came about because of keen interest in the human microbiome that new research shows is linked to everything from mood disorders to immune system dysfunction. Microbes play similarly essential and wide-ranging roles in the external world. They are a healthy foundation for the food web — plants and the critters that eat them are all dependent on soil microbes.

Interest in microbiomes in the natural world is also exploding because many researchers realize that as the planet warms, essential diversity and function in the microbial world could be lost. Some areas may not be able to grow the same crops they are growing now — in the United States, for instance, no corn in Iowa or wheat in Kansas, because the microbes that currently fix nitrogen for the plants’ roots in the soil will no longer be able to do so. And, as we learn more about how microbes function, there may be ways to put them to work in the service of adaptation — enhancing plant growth, for example, in a warming climate.

Most urgent, though, is the fact that the earth has locked up a great deal of carbon and should it come unlocked as C02 it could dramatically speed up climate change. “The big question is whether soil will be a sink or source of greenhouse gases in the future,” said Jansson.

One of the major areas of study is a feedback loop — the impact of climate change on microbes, and the role of microbes in climate change. Soil microbes are key players in how much greenhouse gas permafrost releases into the atmosphere, and it’s probably the most critical area of study. The frozen vegetation, rich in microorganisms, is thawing as the Arctic warms rapidly and microbes consume the newly available plant matter and release both C02 and methane, potent greenhouse gases.

There is concern that some key microbes could become extinct before we know what they do.

This could cause more warming and thawing, a positive feedback loop.

Understanding these dynamics is “really important because about 20 percent of the terrestrial surface of the earth is permafrost,” said Jansson. “As much C02 is stored in permafrost as is stored in plants and the atmosphere. What happens when that carbon becomes accessible to newly activated microorganisms that are there? They can speed up climate warming, and it’s of concern.”

It’s not just permafrost. All soil contains large stores of CO2, and scientists are trying to understand how climate change will impact those stores, and how they could be released by land management practices. Much of this information will help create more accurate models of global climate change. And it will also provide insight into ways to alter land management practices to minimize the amount of CO2 released from soil. Tillage and desertification, for example, unlock greenhouse gases in the soil and allow them into the atmosphere. “There are certain soils that just dragging a plow through it displaces huge, huge quantities of carbon,” said Bailey. No-till farming, which leaves residue from past crops on the soil and minimizes plowing, is far more beneficial because it gives the microbes food and shelter.

There are other functions that could be lost or diminished as climate conditions change. Microbes that have adapted to moist conditions in the old-growth forests of the Pacific Northwest, for example, may not be able to carry out their activities as the soil warms and dries. Consider the zone around tree roots, where a critically important relationship between microorganisms and trees exists. A densely packed community of microbes about the width of a finger live there, and in exchange for exudates — sugars — from the tree, they clean the water that the tree takes in, a critical filter system in the planet’s hydrological cycle. It’s such a robust phenomenon that some engineers use trees, especially willows and poplars, to clean up toxic waste, something called phyto-remediation. This ecosystem service could be diminished if these microbes cannot adapt to maintain this function as soil temperatures climb or if the microbes disappear. Fortunately, there is a lot of redundancy in these communities, so in some cases the function of microbes impacted by climate can be replaced by others. 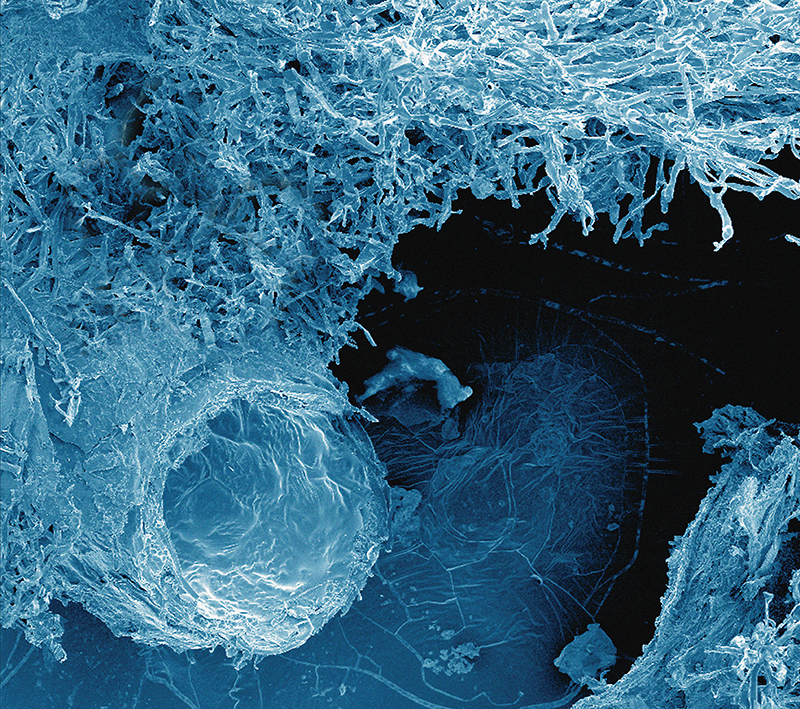 A close-up image of a soil fungus surrounding a pine tree root. PNNL

The jury is out on how warming will impact the phyllosphere — the microbes that live on leaves that help trees to fix nitrogen and function as an immune system, allowing trees to ward off disease. “We are pretty ignorant about how those trees are going to respond and whether or not you make plants more susceptible to pathogens,” when temperatures warm, said Mark Bradford, an expert in the role of microbes in forests and grasslands at the Yale School of Forestry and Environmental Studies.

Whether microbes can go extinct is not settled science. When it comes to microbes, “everything is everywhere” has been the adage among researchers who thought that all types lived everywhere, though abundance varied. Yet as more is learned about these tiniest of critters, some scientists believe that likely isn’t true, and there is concern that some key microbes could be rendered extinct before we know what they do. In 2003, a study published in the journal Ecosystems estimated that the biodiversity of some 5 percent of U.S. soil was “in danger of substantial loss or complete extinction.”

Microbiomes carry out similar kinds of functions in oceans, where researchers forecast similar kinds of problems. There’s a bacterium called trichodesmium, for example, that grows in nutrient-poor parts of the ocean and creates nitrogen gas that fertilizes everything, from plankton to whales. For a study published last year in the journal Nature Communications, these bacteria were placed in warmer conditions that simulate forecasts for a future climate, and they went into reproductive overdrive and began gobbling up iron and phosphorus, nutrients which are in limited supply and needed by other organisms. It’s a scenario that could cause those other microorganisms to disappear, or, if the trichodesmium caused its own extinction, it would leave a gaping hole in the food web.

Microbes may also be able to be tapped for beneficial uses. Research shows microbes can be applied to seeds to activate natural plant defenses against pests to reduce pesticide use or make crops more resilient in the face of drought.

Certain kinds of vermicompost — fertilizer made from worm castings — have been shown to greatly enhance beneficial microbes in the soil, reducing disease in plants and boosting their natural defenses against insects.

And in Japan, fishermen learned about research that showed that decaying trees released humic acid into the ocean, a chemical that which allowed microorganisms called phytoplankton to fix iron, a fertilizer, and exponentially increase their growth. They formed a group called Forests are the Lovers of the Sea to plant trees around the country to bring fish and stocks back by stimulating the growth of the plankton, the bottom of the food web.

Knowledge of these tiniest of natural systems and their role in the world is key going into the future. “We need to understand clearly how microbes are going to behave in a changing climate,” said Bailey. “By understanding what’s going to happen, we can make better plans.”