As brutal fires torch tinder-dry dense forests and neighboring homes in the American West, researchers are examining the relationships between drought, wildfire, and a warming climate, predicting mass forest die-offs and prolonged megadrought for the Southwest. These forces are accelerating, they say, and already transforming the landscape. Unchecked, they may permanently destroy forests in the southwestern U.S. and in some other regions around the world.

Across the West, “megafires” have become the norm. With climbing temperatures, after a century of fire suppression, the total area burned has tripled since the 1970s, and the average annual number of fires over 10,000 acres is seven times what it was then. Fighting and suppressing fires costs more than $3 billion a year, not to mention lives lost. So understanding what, if anything, can be done to reduce intense forest fires has assumed an urgent priority.

Currently suffering the worst drought in the U.S., New Mexico has emerged as a “natural experiment” in megadrought, a laboratory for understanding drought’s deep history in the region — and what might lay in store in an era of rapid, human-caused warming. 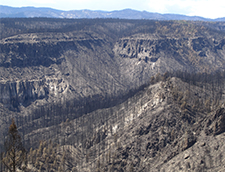 Ridge lines with scorched trees from the 2011 Las Conchas fire in New Mexico, the second-largest blaze in the state’s history. USGS

With a highly variable climate, the Southwest boasts perhaps the best-studied megadrought history in the world. It’s the home of dendrology, the science of studying tree-rings, first developed at the University of Arizona. The pronounced seasonality of hot summers followed by cold winters produces well-defined rings, while archaeological fascination with Southwestern cultures — Chaco Canyon, Mesa Verde, and other sites where ancient peoples flourished and disappeared — has supported the collection and study of centuries of tree-ring data. Temperate-zone trees lay down wider rings in wet years, which narrow or vanish during drought. What’s more, rings can be precisely dated, with sets matched against each other, revealing burn scars and patterns of climate, precipitation, drought stress, and tree mortality.

Park Williams, a young bioclimatologist and postdoctoral fellow at Los Alamos National Laboratory, has teamed up with other specialists at the U.S. Geological Survey (USGS) and the University of Arizona to wring new insight from the data set spanning the years 1000 to 2007. Driving recently into the Jemez Mountains near his office, we pass rust-red pines, dead or dying from drought. Later, kneeling next to a freshly cut stump, he points to a ring near the bark. “That thick ring right there is probably 1998,” he says, a wetter El Niño year.

Armed with 13,147 such site-specific cross-sectioned specimens, gathered from more than 300 sites, Williams and his co-authors devised a new “forest drought-stress index,” integrating tree-ring measurements with climatalogical and historical records for a paper published earlier this year in Nature Climate Change. Winter precipitation has long been thought important to tree growth, but another key variable leapt from this fresh examination of the data, related to a warmer, dryer climate: the average vapor pressure deficit during summer and fall, which is driven by temperature. As air grows warmer, its capacity to hold water vapor increases exponentially, which speeds evaporation and sucks more moisture out of trees’ leaves or needles, as well as the soil itself.

‘The majority of forests in the Southwest probably cannot survive in the temperatures that are projected.’

If the vapor pressure deficit sucks out enough moisture, it kills trees, and there’s been a lot of that going on. Looking back in time through the tree rings, Williams determined that the current Southwest drought, beginning in 2000, is the fifth most severe since AD 1000, set against similarly devastating megadroughts that have occurred regularly in the region. One struck during the latter 1200s (probably driving people from the region) and another in 1572-1587, a drought that stretched across the continent to Virginia and the Carolinas. Few conifers abundant in the Southwest — including piñon, ponderosa pine, and Douglas fir — survived that latter event, despite lifespans approaching 800 years; those species have since regrown.

The forest drought stress index correlates strongly with these periods, while 20th-century temperature records show a connection between drought and tree mortality associated with huge wildfires and bark-beetle outbreaks, such as the devastating ones of the past two decades. Williams’ study is also supported by satellite fire data from the past few decades, revealing an exponential relationship between drought stress and areas killed by wildfire.

His projections, based on climate forecasts, sparked grim headlines throughout the region: If the climate warms as expected, forests in the Southwest will be suffering regularly from drought stress by 2050 at levels exceeding previous megadroughts. After 2050, he calculates, 80 percent of years will exceed those levels. “The majority of forests in the Southwest probably cannot survive in the temperatures that are projected,” he says.

Making matters worse in the near-term, forests hit by so-called “stand-destroying” wildfires may not recover. During a recent phone interview, Craig Allen, a co-author of the Nature paper and a USGS research ecologist at the Jemez Mountain Field Station near Los Alamos, explains that the catastrophically hot fires seen recently in New Mexico, while a natural result of a century of fire suppression and dense growth during wet periods, create conditions for permanent forest loss through “type conversion.” Basically, high severity fires that burn over a wide area subvert the ability of southwestern conifers to reproduce, a process requiring nearby mother trees to drop their seeds. Ponderosa pines, for example, can’t cast their seed much more than 100 yards, virtually ensuring that large forest gaps will be replaced by shrub and grasslands, with unfortunate consequences for a range of forest services, particularly those provided by delicate watersheds. “These anomalously big patches where every tree is killed create a high risk that they won’t come back as forests,” Allen says.

The West’s drastic drought-related fires may foretell what could happen to forests globally as the climate warms. Tree-mortality has been on the rise across the American West, according to a 2009 Science study, and recent analysis from the National Center for Atmospheric Research projects “severe and widespread drought” by the 2060s for much of the Americas, as well as Europe, southern Africa, southeast Asia, parts of the Middle East, and Australia.

A study projects ‘severe and widespread drought’ by the 2060s from the Americas to Australia.

These conditions are already taking a toll: Earlier this year, NASA published a study on megadrought in the Amazon, where severe drought in 2005 caused a dieback of old-growth canopy across an area the size of California, covering 30 percent of the Amazon. Rainfall gradually recovered, but to the researchers’ surprise, satellite images revealed that the damage has been lasting. Caused by the same warming of Atlantic sea surface temperatures that empowered Hurricanes Katrina and Rita, that once-in-a-century drought was quickly followed by another in 2010, affecting almost half the Amazon. The forest canopy loss appears related to prolonged drought stress.

Allen and a host of co-authors conducted a 2010 global overview of drought and tree mortality, a sobering list of seasonal and multi-year droughts on every forested continent since 1970, some lasting over a decade. While acknowledging scientific uncertainties, the overview reiterates concerns increasingly expressed by researchers: that the planet could see widespread and abrupt forest collapse caused by droughts, that rainforests could begin producing more carbon than they sequester (which the Amazon experienced in 2005 and 2010), and that drought could push the expansion of the dry subtropics into critically important agricultural areas, with devastating consequences for world food production. While excluding fire-driven mortality, the 2010 study cites well-documented recent forest die-offs in Spain, Greece, Russia, Australia, and, of course, North America, all places that have seen recent severe wildfires.

“I don’t want to be a prophet of doom,” Allen says, after a week juggling fire updates and journalists’ queries. He grants that even extreme fires do some good, correcting unsustainable growth after wet decades allowed forests to “fluff-up.” Recent drought is, he says, “squeezing that excess tree biomass out of the landscape.”

He emphasizes that forest managers know how to “treat” overgrown forests, through thinning and controlled burns, but that prescription is not welcomed by all. For instance, University of Wyoming researchers have criticized Forest Service thinning plans, such as the Four Forest Restoration Initiative in Arizona, suggesting that high-severity fires were once common and continue to act as natural part of the western ecosystem.

One expert notes that even extreme fires do some good, correcting unsustainable growth after wet decades.

But that’s a minority view as foresters around the world experiment with novel methods of maintaining or restoring woodlands, searching for drought-adapted species and genotypes and ways to control evaporation. Seedlings planted on a degraded, fire-damaged Mediterranean mountainside near the coast of Spain were kept alive with water drained from fog-collectors, which consisted of flat mesh panels mounted above the restoration area. “We don’t have to treat every acre,” Allen points out.

He and other foresters have called for radically “rethinking” forest management during drought, suggesting that we might have to consider tree triage — pinpointing pockets of forest more likely to survive or even irrigating beloved landscapes, such as California’s ancient sequoias, to save them. 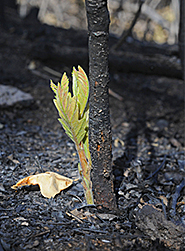 A shoot appears beneath a tree charred by the 2011 Las Conchas fire in New Mexico. SALLY KING/NPS

The devastation wrought by extreme wildfire is on vivid display these days in New Mexico. During my drive in the Jemez Mountains with Park Williams, with near-record temperatures in the nineties, he directs me onto a forest road traversing Cochiti Mesa, a spine of land at the heart of the 2011 Las Conchas wildfire, an event that has become legendary among students and fighters of fire.

On June 26, 2011, an aspen tree blown onto a power line sparked fire so hot, travelling so fast, that it consumed 44,000 acres during its first 13 hours, nearly an acre per second. By the time it was fully contained in August, it had burned more than 156,000 acres. Las Conchas was the largest fire in New Mexico history, a record that stood for a mere year, when a bigger, if less destructive fire, burned to the south.

Even two years later, the view from the mesa is jaw-dropping, a forest Golgotha. In a gap 40,000 acres wide, for miles in every direction, every tree is dead. As the wind whips grit into our eyes, Williams tells me that trees in some areas burned so hot that the trunks vanished, leaving ghostly holes. Others flash-burned from heat alone, their crisp, dead needles still intact. Photographs taken afterwards show a moonscape of ash. Few living things have returned — shrubs, clumps of grass, a few splashes of Indian paintbrush.

But trees, no. Ponderosa pine may not come back, without help. The intense heat sterilized soil and destroyed virtually all biomass across wide areas, creating huge gaps that trees will not be able to reseed. Colorado saw this after 2002, when the Hayman fire left a gaping, 50,000-acre hole. Except for a fraction reseeded by the U.S. Forest Service, trees have not grown back and are not expected to for centuries.

Gazing across the Rio Grande valley, we can see another manifestation of megadrought: a ballooning pyrocumulonimbus cloud from another fire, sparked in the Pecos Wilderness the night before. Later that afternoon, the plume reaches 20,000 feet, looming over Santa Fe, whose own watershed has been closed to the public since 1932 because of the threat of fire polluting two reservoirs that supply forty percent of its water. The watershed has been thinned. But Park Williams, with foresight granted by a thousand years of tree-ring records, can see its future.