On a chilly April morning, when the buds had opened just enough to cast a faint red haze on the trees, Jim Turek drove me out to see how his latest construction project was faring after a long winter. In December, work crews completed a project designed to let fish swim over the old Kenyon Mill Dam spanning the Pawcatuck River in Richmond, Rhode Island. The dam, and one that probably preceded it, had been blocking the fish’s path from the sea to their upriver spawning grounds since the 1700s. What was once likely an annual migration of hundreds of thousands of river herring and tens of thousands of American shad had dwindled to just a few hundred fish. Runs of Atlantic salmon had long since disappeared.

This was not your typical fish ladder — narrow concrete, metal, or wood contraptions that look a bit like flooded pedestrian highway overpasses. Instead, work crews had installed boulders in sweeping arcs or V-shaped formations clear across the river to create a series of broad pools. These ramped gradually from the natural riverbed up the now nearly submerged 5-foot-tall dam, whose top they had replaced.

A new nature-like fishway at Kenyon Mill Dam is aimed at helping shad and herring make their way up the Pawcatuck River. REBECCA KESSLER

The new fishway looked downright pretty, much like a natural swoosh of river, albeit bound on one side by a stone retaining wall and ribbed by a rather orderly series of rapids. In fact, it had been carefully designed to accommodate the particular swimming capabilities and behavioral quirks of shad and herring. These struggling species are critical food for commercial fish stocks along the U.S. East Coast. But there were no fish in sight, even though it was nearly prime migration season. Three dams downstream still blocked fish trying to enter the river, explained Turek, a restoration ecologist with the U.S. National Marine Fisheries Service (NMFS).

Populations of 24 North Atlantic migratory fish species are down to less than 10 percent of their historic size.

Like the Pawcatuck, U.S. rivers once teemed with diadromous fish, which migrate between the salty ocean and inland freshwater bodies: alewives, blueback herring, shad, salmon, trout, smelt, eels, lamprey, sturgeon, and others. But the installation of thousands of dams, culverts, and other barriers, along with factors like overfishing and pollution, squeezed the fish flow to a trickle. Populations of 24 North Atlantic diadromous fish species are now down to less than 10 percent of their historic size, and half are down to less than 2 percent, by one estimate. New England alone has no fewer than 25,000 dams. Some provide valuable services, like electric power and drinking water. But many are small defunct or failing relicts. Nobody knows exactly how many dams exist across the U.S., but the number may well exceed 1 million, experts say. Roughly half are privately owned, according to the Federal Emergency Management Agency. 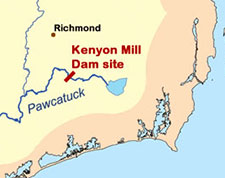 Located in southern Rhode Island, the Pawcatuck River was once barred by six dams, including the Kenyon Mill Dam.

Various government agencies and conservation groups are slowly chipping away at the fish passage problem. Everyone agrees that the ideal is to take out dams. This provides immediate and permanent improvements in transit for fish and other aquatic life, as well as in water quality and the transport of sediments and nutrients downstream. In the U.S., dam removal is picking up steam. Of the 1,150 U.S. dams removed since 1912, some 850 came out in the last 20 years, according to the conservation group American Rivers. When dams can’t be removed, however, people are increasingly building so-called “nature-like fishways,” such as the one surmounting Kenyon Mill Dam.

Recent research is helping refine the design of these relatively new fishways. They won’t work for every dam, particularly high ones. But experts say that when they’re built right, they should deliver more fish of more species, offer more habitat, and demand less maintenance than traditional fish ladders. And they look better, too.

Turek works to improve diadromous fish passage on rivers throughout New England as part of a nationwide NMFS initiative. He has attended dozens of community meetings to discuss what to do about old dams. Sometimes financial considerations prevent removal of a dam, like the cost of moving a road built on top, dealing with contaminated sediment, or the loss of lakefront property. Other times it’s sentimental attachment to a pond or a desire to maintain a historically significant dam.

Kenyon Mill Dam was originally built to power a mill, but its current owner, a textile company, now draws water for fire suppression from its impoundment. Turek says removing the dam — his agency’s first choice on any fish-passage improvement project — could probably have been done for less than two-thirds of the $925,000 construction cost for the more natural fishway. But factors including the possibility that lowering the impoundment’s water level could have adverse effects upriver, particularly on local wells, ultimately led to the choice of a nature-like fishway over dam removal.

Many older fish ladders are dysfunctional and data on their overall performance are scarce.

Over the years so-called “structural” or “technical” fish ladders and elevators have been appended to a minority of U.S. dams. Many of the designs were developed a century or more ago to aid large, athletic, high-jumping salmon and trout, without a thought for the less-charismatic fish in the river, says Alex Haro, an ecologist with the U.S. Geological Survey. And while some of these ladders work well for certain species in certain situations, Haro says many are dysfunctional, and data on their overall performance are scarce.

“Many of the design criteria for technical fishways up until now have basically been pulled out of a hat or based on anecdotal experience.” Haro says.

A more natural approach to fish passage originated in Europe in the 1970s. The basic idea is to simulate a river with natural materials and flow conditions. Common designs are bypass channels circumventing a dam and rock ramps, like the one at Kenyon Mill Dam. In Europe, nature-like fishways are the preferred solution after dam removal, which is far less common than in the U.S., according to Herman Wanningen of the Netherlands-based company Wanningen Water Consult. Even so, because of higher costs, they still only account for perhaps 20 percent of installed fishways in countries that use them most, Wanningen says. These include the Netherlands, Germany, France, Belgium, Austria, and Switzerland. Recent examples include a newly opened nature-like fishway to help fish and eels over the Herting hydropower dam on Sweden’s Ätran River.

In North America, a few nature-like fishways were completed in the late 1980s and early 1990s, and the approach has gradually gained popularity since, particularly in New England, the Pacific Northwest, Minnesota, and parts of Canada. Nature-like fishways — which also go by names like “roughened channels” and “stream-like fishways” — are catching on elsewhere, too, including Australia, New Zealand, and Japan.

‘I feel pretty confident that we know what we’re doing now,’ an ecologist says of fishways.

What little hard data there is indicates that the performance of more natural fishways is variable but encouraging, Haro says. For instance, he and three coauthors found that 94 percent of the alewives attempting to pass one New England nature-like fishway made it through, but that only 40 percent managed to traverse another. The poor performer was one of the region’s earliest nature-like fishway projects, and low on the learning curve, Haro says. He believes well-designed projects should approach the 94 percent figure.

Research into the biomechanical and behavioral needs of particular species is helping refine fishway design. Haro runs a unique laboratory in Turners Falls, Massachusetts, with a 120-foot-long hydraulic flume — essentially a model river — where scientists can test how fish navigate various structures under different flow conditions. With NMFS funding, Haro’s team tested around 15 Northeastern diadromous fish species to identify such capabilities as their maximum jumping height and sprint-swimming speed and duration. That helped them determine critical fishway design criteria, such as water velocity and depth, and passageway dimensions. For instance, neither river herring nor shad can jump higher than a foot. And while river herring will dart through small gaps between rocks, shad require larger openings and are easily deterred by turbulence.

This fall, Turek and Haro plan to release design guidelines for nature-like fishways along the East Coast. Guidelines for a few other regions in the U.S. and Europe exist, but without such detailed supporting data on fish capabilities and behavior. “I feel pretty confident that we know what we’re doing now,” Turek says.

One expert says that building nature-like fishways is “not even close to the benefits of removing a dam.”

Laura Wildman, a Connecticut-based engineer with the environmental consulting firm Princeton Hydro, says she looks first to nature-like fishways when dams can’t come out. Nevertheless she bristles when people suggest a nature-like fishway as a fair compromise between removing a dam and tacking a technical fishway onto it. A chief drawback is that the river remains blocked. “They are not even close to the benefits of something like removing a dam,” Wildman said. “The barrier still exists. The problem still exists. The maintenance issues will exist. They’re artificial structures.”

The Ambitious Restoration of An Undammed Western River

Budgets for improving fish passage are tenuous. But to get serious about restoring migratory fish, Wildman says, government agencies and conservation groups must not only invest more in reconnecting disjointed rivers now, but also start planning decades ahead to decommission fish-blocking structures once the reasons for keeping them expire. “If we want to think about sustaining diadromous fish in the long run, we have to have a really big picture [vision] that may seem unrealistic to obtain right now,” she says.

For 20 years Turek has dreamed of reconnecting the Pawcatuck, one of southern New England’s most important migratory fish habitats because of its unpolluted waters and the prime spawning grounds at its head. At the start, six dams barred the 28-mile river. So far, he’s helped make three fish-friendlier. After Kenyon Mill, we stopped at a much-photographed horseshoe-shaped dam sporting new structural fish ladders based on Haro’s data. Then we were off to another nature-like fishway, this one installed to ease fish over steep bedrock where a dam had been removed.

Turek says it will be a few years before something can be done about the three dams downstream that prevent most fish from ever reaching those new passages; one option is their complete removal. Meanwhile, the state is stocking the river to jumpstart the run. If the plan succeeds, Turek says the Pawcatuck’s spring migration could reach 500,000 river herring and 5,000 American shad. Teeming once more, the fish will be a sight to behold. “People never seem to get tired of watching fish runs,” says Turek. “People are mesmerized. … There’s something therapeutic about it.”