Forty years ago, the U.S. Congress, in an uncharacteristically uncowardly move, overwhelmingly overrode President Nixon’s veto and passed the most powerful law for the protection of water in American (and perhaps world) history. Yes, this year the Clean Water Act officially enters its midlife crisis years.

Since it is a law, and not a person, we won’t expect it to buy a red sports car and hook up with another law half its age. But having aged and weathered and yet oftentimes stood firm against its adversaries even if its knees became not quite what they used to be, it is worth asking this much buffeted piece of legislation in its 40th year, the three essential questions of mid-life.

So, to begin with, Clean Water Act, who are you?

The Federal Water Pollution Control Act of 1972, known as The Clean Water Act was not the first piece of federal legislation to protect water. But it was the first time that real power was invested with the federal government to make sure that water got clean and stayed clean. Its essential demand, that all waterways in the United States be “fishable and swimmable” by 1985 was remarkable in its forthrightness. It invested the Environmental Protection Agency with the power to prosecute “point source polluters,” i.e. commercial enterprises directly responsible for fouling the water. No longer was the onus on citizens to prove the value of clean water. Rather the burden was switched to industry. Industry had to prove that its actions did not impinge upon what became codified as an American right to fish and swim, safely, in public waterways.

Next, Clean Water Act, what have you done? 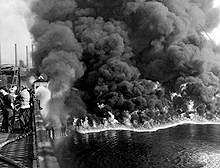 Cleveland Press Collection/
Cleveland State University
The Cuyahoga River in Cleveland caught fire regularly through the 1950s and 1960s, including this 1952 blaze.
Are all public American waterways fishable and swimmable as they were mandated to be by 1985? They most assuredly are not. But the most egregious aspects of the abuse of water have stopped. Cleveland’s Cuyahoga River no longer catches fire, as it did regularly, throughout the 1950s and 60s. A corporation can no longer spill oil into the sea and expect to escape without a fine. Indeed, the billions of dollars British Petroleum will undoubtedly have to pay in the coming years as a result of the 2010 Gulf Spill are made possible by the instruments of the Clean Water Act.

And these gains extend from the broadly national to the intimately local. Because of the Clean Water Act, New York City now has more than a half-dozen public swimming events in New York Harbor, including a 28.5-mile loop of Manhattan that will take place this June. Because of the Clean Water Act, oysters placed on six test reefs in an experiment coordinated by the Hudson River Foundation in 2010 found enough dissolved oxygen to survive, raising the possibility that oysters could once again become an integral part of the Hudson River estuary. But there is still a lot of work to be done.

Which leads us to, Clean Water Act, what else can you do?

It is a remarkable achievement that point-source polluters can now be monitored and often controlled. But there still remain two vital areas of clean water protection that have yet to be brought in line. The first is the control of “nonpoint source” polluters — the diffuse negative impacts of humanity in general. While it is fairly straightforward to identify a pesticide manufacturer that is dumping its effluent into a waterway and sue it because of that violation, it is considerably more difficult to mitigate the effects of private citizens whose brazen acts of clean water abuse often consist simply of flushing their own toilets. Because of outdated and overloaded wastewater treatment plants, for example, raw sewage still pours into New York Harbor through “combined sewage overflows” whenever it rains more than a tenth of an inch. We need to figure this piece of the puzzle out, not only through large-scale modernization and expansion of sewer systems but also by establishing tax incentives for the implementation of innovative storm water sequestering technologies like green roofs. 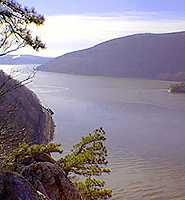 USGS
Because of the Clean Water Act, water quality in New York’s Hudson River has improved dramatically in the last four decades.
The other trick the old dog might pull off in its middle years is to let its bite finally exceed its bark on a critical area of its jurisdiction. Section 404c of the Act allows the EPA to protect waterways that support shellfish beds, fish spawning grounds, wildlife zones, and recreational areas. As I write these words, proponents for the development of the gargantuan “Pebble Mine” copper and gold prospect in Alaska’s Bristol Bay are already denouncing a recently completed EPA “watershed assessment” of the region even before the public has gotten a chance to look at it. This assessment will almost certainly provide the scientific justification for a 404c action that will protect Bristol Bay — home to the largest concentration of wild salmon left on earth. EPA could effectively protect the area — and its half-billion dollar a year fishing industry — as a vast, commercially productive wild salmon reserve. The Clean Water Act might just have the teeth to do that; but this old guard dog must be loosed for the attack for the law to become all that it was meant to be.

A bold promise. A lot, but not enough, accomplished. Many interesting and important things still left to do. If I were turning 40 this year, I would find that summing up of my life-to-date cause for pride, anxiety and hope. Such a summing up might even make me feel a little bit young. There are many out there for whom 40 is just the start of the most meaningful part of their lives. As they say nowadays, 40 is the new 30.