A single patent a century ago changed the world, and now, in the 21st century, Homo sapiens and the world we dominate have an addiction. Call it the nitrogen fix. It is like a drug mainlined into the planet’s ecosystems, suffusing every cell, every pore — including our own bodies.

In 1908, the German chemist Fritz Haber discovered how to make ammonia by capturing nitrogen gas from the air. In the process he invented a cheap new source of nitrogen fertilizer, ending our dependence on natural sources, whether biological or geological. Nitrogen fertilizer fixed from the air confounded the mid-century predictions of Paul Ehrlich and others that global famine loomed. Chemical fertilizer today feeds about three billion people.

But the environmental consequences of the massive amounts of nitrogen sent coursing through the planet’s ecosystems are growing fast. We have learned to fear carbon and the changes it can cause to our climate. But one day soon we may learn to fear the nitrogen fix even more.

Artificial nitrogen is as ubiquitous in water as man-made carbon dioxide is in the air.

A major international survey published in September in Nature listed the nitrogen cycle as one of the three “planetary boundaries” that human interventions have disturbed so badly that they threaten the future habitability of the Earth. The others — according to the study by Johann Rockstrom, of the Stockholm Environment Institute, and 27 other environmental scientists — are climate change and biodiversity loss.

Nitrogen affects more parts of the planet’s life-support systems than almost any other element, says James Galloway of the University of Virginia, who predicts: “In the worst-case scenario, we will move towards a nitrogen-saturated planet, with polluted and reduced biodiversity, increased human health risks and an even more perturbed greenhouse gas balance.”

Artificial nitrogen washes in drainage water from almost every field in the world. It is as ubiquitous in water as man-made carbon dioxide is in the air. It is accumulating in the world’s rivers and underground water reserves, choking waterways with algae and making water reserves unfit to drink without expensive clean-up.

Most of the man-made nitrogen fertilizer ever produced has been applied to fields in the last quarter-century. Nature has some ability to reverse man-made fixing of nitrogen, converting it back into an inert gas — a process called denitrification. But last year, Patrick Mulholland of the Oak Ridge National Laboratory in Tennessee reported that the system is being overwhelmed. Many rivers in the U.S. are now so nitrogen-saturated that they are losing their ability to denitrify pollution.

Why should a fertilizer kill? It is just too much of a good thing. It over-fertilizes the water, producing such large volumes of algae and other biomass that it consumes all the oxygen in the water, causing the ecosystem to crash. Coastal bays, inlets and estuaries around the world are succumbing.

A study earlier this year found that algal blooms dump domoic acid, a neurotoxin, onto the ocean floor, where it persists for weeks. “The first signs are often birds washing up on the shore or seals acting funny, aggressive and twitching, looking as if they were drunk,” says Claudia Benitez-Nelson of the University of South Carolina. 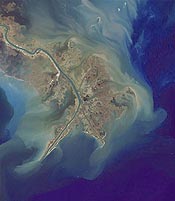 NASA
Fertilizer running down the Mississippi and Missouri Rivers create a so-called “dead zone,” visible in this 1999 NASA satellite image.

Notoriously, fertilizer running down the Mississippi-Missouri river system creates a “dead zone” in the Gulf of Mexico. Typically, around 20,000 square kilometers of ocean forms a layer without oxygen or fish — killed by the nitrogen fix.

The number of dead zones has “spread exponentially since the 1960s,” says Robert Diaz of the Virginia Institute of Marine Science in Gloucester Point. He counted more than 400 in a study for Science last year. They now cover a quarter of a million square kilometers, usually where rivers discharge large amounts of fertilizers and sewage into relatively enclosed oceans.

You find these dead zones in the waters between Japan and Korea; in the Black Sea, where an invasion of alien jelly fish in the 1980s wiped out most native species; off the tourist beaches of the northern Adriatic; in Chesapeake Bay and the ocean waters off Oregon; and in the semi-enclosed Baltic Sea, the largest dead zone in world.

Nitrogen is a vital nutrient in soils, essential for growing crops. Soils recycle nitrogen in organic waste, including animal dung. But before Haber’s discovery, the only way of adding more atmospheric nitrogen to soils was through capture by the bacteria that live in a small number of nitrogen-fixing plants, including legumes like clover and beans.

In the 19th century, densely-packed countries like Germany and Britain began to improve the fertility of their soils by importing nitrogen in the form of guano from the Pacific islands of Peru, and saltpetre mined in Chile. Geological nitrogen was a geopolitical resource as vital as oil today.

Appeals were made for science to come up with a new method of producing nitrogen in a form that plants could absorb. Haber won the race, filing his patent for fixing ammonia, a molecule made of nitrogen and hydrogen atoms, from the inert nitrogen gas that makes up 70 percent of the air.

Now, ammonia could readily be turned into chemical fertilizer and added to the world’s fields as easily as cow dung. German industrialist Carl Bosch opened the first factory near Ludwigshafen in 1913. It was in the nick of time for Germany. During the First World War, unable to receive shipments of guano from South America because of a British naval blockade, Germany would quickly have starved but for the Haber-Bosch process.

Much of the nitrogen in our bodies today comes from giant chemical factories.

Outside Europe, few initially took up chemical fertilizers to intensify their farming. It was usually cheaper and easier to expand farming — drainingmarshes, ploughing prairies and clearing forests. But by the 1960s, as world population soared, fertilizer manufacture took off, and plant breeders developed new lines of high-yielding crops that responded best to the nitrogen fix. During this “green revolution,” there was an eight-fold increase in global production of nitrogen fertilizer from the 1960s to the 1980s.

Today, of 175 million tons of nitrogen applied to the world’s croplands in a year, almost 50 percent is from chemical fertilizer. It has raised the “carrying capacity” of the world’s soils from 1.9 people per hectare of farmland to 4.3 — and 10 in China, where applications reach twice anything seen in Europe.

This is a profound change to the biochemistry of life on Earth — and to our own bodies. Today, much of the nitrogen in our bodies comes not from biological sources but from giant chemical factories. We are, in a real sense, as much chemistry as biology. Vaclav Smil, the distinguished Canadian researcher into food and the environment at the University of Manitoba, calls the nitrogen fix “an immense and dangerous experiment.”

Besides fertilizer, we are also making biologically available nitrogen by burning fossil fuels. Power stations emit nitrogen oxides that create acid rain, the environmental scourge of industrialized countries in the 1980s and 1990s. Nitrogen oxides in the air are also potent greenhouse gases, adding to global warming, and even reach the stratosphere, where they join chlorine and bromine compounds in eating up the protective ozone layer.

“Most of the world’s biodiversity hotspots are receiving doses of nitrogen from the air and in water at levels known to damage many species,” according to Gareth Phoenix of the University of Sheffield in England. Yet the issue has never been addressed by the UN Convention on Biological Diversity.

In temperate lands, this is turning heaths into grasslands, while grasslands typically lose a quarter of their species richness. Within nitrogen-flooded ecosystems, aggressive outside species outperform most natives. So nitrogen is the hidden force behind invasions of alien species around the world.

The prognosis is not good. The scientists who wrote the Nature paper on planetary boundaries argued that human nitrogen releases to the natural environment should be cut by three quarters, to around 35 million tons. But on current trends, global nitrogen use on farmland is set to double to 220 million tons a year by 2050 — more than six times the safe threshold.

The danger is that nature’s ability to process this excess nitrogen and return it to the atmosphere will be overwhelmed, and we will end up inhabiting a nitrogen-saturated planet, with nitrogen driving global warming, acidifying air, eating the ozone layer, reducing biodiversity, and killing the oceans.

What can be done? To meet the target cited in the Nature study requires a transformation of the world’s agriculture as profound as the transformation of energy industries needed to meet targets for cutting greenhouse gases. There is an urgent need, says Smil, to breed crops that are far more efficient at absorbing the nitrogen in fields, and for developing farming systems that manage nitrogen far better.

Luckily the potential is considerable. In China, where nitrogen application to fields is among the highest in the world, a study by a group of scientists led by Wilfried Winiwarter and Tatiana Ermolieva of the International Institute for Applied Systems Analysis found that better on-farm management of nitrogen could cut nitrous oxide emissions to the environment by 25 percent without damaging farm output.

Galloway says the flow of nitrogen through the environment can also be reduced by decreased emissions from burning fossil fuels — perhaps as a byproduct of efforts against climate change. And better sewage treatment in cities could convert nitrates that have passed through the human gut into safe gaseous nitrogen.

If anything exemplifies humanity’s growing impact on the planet’s life-support systems, it is the way we are overwhelming the nitrogen cycle. There are solutions. But for now we are hooked. As Smil put it: “In just one lifetime, humanity has developed a profound chemical dependence.”