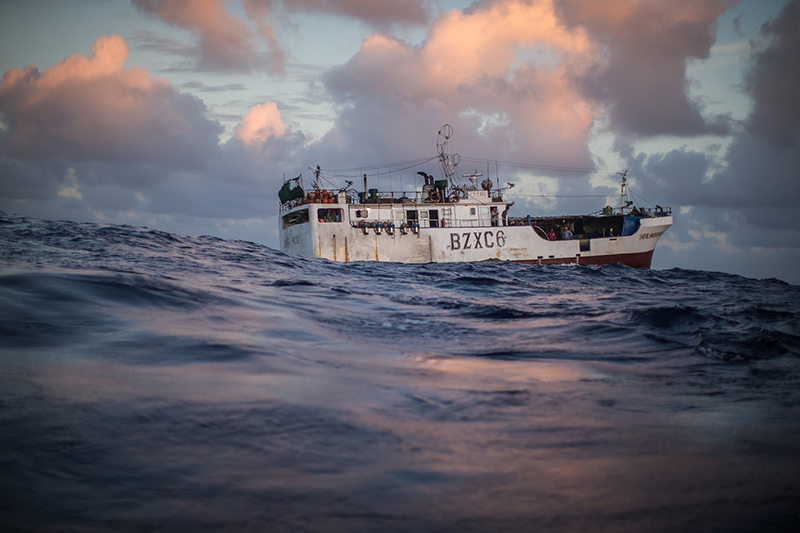 Beneath the waves of the Pacific, powerful, gleaming tunas swim at such speeds that some species have earned the moniker “Porsches of the Sea.” But when hauled above the surface, the skipjack, yellowfin, Pacific bluefin, albacore, and bigeye most commonly fished in the region are valued largely for the estimated $6 billion in revenue they generate each year. This lucrative trade, though, comes at a high environmental cost: Alongside the vast annual Pacific tuna haul, countless tons of bycatch — sharks, rays, turtles, seabirds, and other non-target species — are reeled in, too.

It has been an intractable problem, but one small island nation in the western Pacific is attempting to do something about it. Palau — its 250-odd islands scattered like emerald confetti upon a turquoise sea — is launching a series of initiatives designed not only to sharply reduce bycatch in the tuna fishery, but also to create a vast, 193,000-square-mile marine reserve — covering 80 percent of its waters — where fishing and undersea mining will be banned.

For a nation so small — Palau is home to just 21,000 people — it’s a bold move. And if it succeeds, this remote chain of small islands, whose government has been a regional leader in marine conservation, could claim its own sustainable brand of tuna and set an example for the rest of the Pacific. 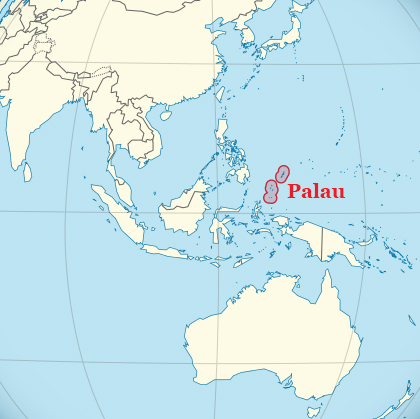 Palau, an archipelago in the Pacific. TUBS/WIKIMEDIA

After experiencing decades of rampant overfishing, a growing number of island nations in the Pacific, including Kiribati and the Federated States of Micronesia, also are creating marine protected areas and more closely monitoring foreign fishing fleets using satellite technology.

Sixty-five percent of the world’s tuna is fished from the Pacific Ocean, and Palau lies in the heart of this hunting ground. A longline fishery operating in the nation’s waters targets yellowfin and bigeye tuna, the latter favored by sashimi connoisseurs for its fatty flesh. But these migratory species have suffered the ravages of overfishing from foreign fleets. In 2006, the country caught about 3,000 metric tons of bigeye, and 2,000 of yellowfin. Last year, those numbers dipped to 115 metric tons and 148 metric tons, respectively.

Tuna populations in the Pacific have experienced significant declines since the advent of industrial tuna fishing in the 1950s. Pacific bluefin have been affected the most, their populations dropping by 97 percent from historic levels, according to estimates from the Pew Charitable Trusts. In the western and central Pacific, bigeye tuna populations have dipped to just 16 percent of historic levels, according to Pew. One investigation found that illegal, unreported, and unregulated tuna fishing could be depriving countries in the Indo-Pacific region of up to $1 billion in fishing revenue.

The beleaguered tuna industry also poses a threat to other species: One-third of Palau’s tuna haul is actually bycatch, a medley of Olive Ridley sea turtles, rays, and blue and silky sharks. They are drawn to the fishery’s endless hook-festooned lines of bait, which are intended for tuna, but snag other species as well.

One-third of Palau’s tuna haul is bycatch, a medley of sea turtles, rays, and blue and silky sharks.

Ensnared below the surface, the hooked creatures often drown or suffer fatal damage from swallowed hooks that tear at their guts.

Now, this problematic trifecta of fishing method, hook, and bait is what Palau is trying to address. Palau’s Ministry of Natural Resources, Environment, and Tourism has awarded a year’s fishing rights to the non-profit The Nature Conservancy and a crew of fishermen: Together, they’re chartering a boat that will experiment with a suite of fishing methods to help longlines target more of the right fish. “We’re creating small changes in gear types, bait, and fishing strategies to find out whether we can significantly reduce bycatch, while [keeping fishing] economically viable,” says Mark Zimring, program director for the Indo-Pacific Tuna Program at the Nature Conservancy.

The three-phase experiment will start by testing whether differently sized circle hooks — designed to hook a fish in the lip, as opposed to J-hooks that end up hooking fish in the throat or stomachs — cause less bycatch. Research has shown the benefits of this technique, according to Michael Osmond, senior program officer for fisheries with the World Wildlife Fund and director of its Smart Gear competition, which seeks practical solutions to bycatch. Bigger circle hooks are also harder to swallow — added insurance against fatality.

The second phase will examine whether fish or squid bait is better for non-target species: Fish bait falls apart when eaten, making it more likely that turtles, in particular, will be able to consume the bait while avoiding the hook beneath.

Finally, the researchers also hope to test whether daytime versus nighttime fishing generates less bycatch, and if casting lines at different depths could help the fishery steer clear of non-target species.

All of this is taking place aboard the Chinese-flagged Shen Lain Cheng, a 79-foot, eight-crew longliner operated by Luen Thai Fishing Ventures, a company with multiple fleets in the region. “Luen Thai, we estimate, is responsible for about 25 percent of the global fresh sashimi-grade tuna market,” Zimring notes. The company has a mixed record: Greenpeace has criticized its fishing activities, and in 2013, some of Luen Thai’s boats were found illegally fishing and finning sharks in the South Pacific — a practice the company’s vice president, Derrick Wang, assures is now firmly in the company’s past. “Our fleet is one of the most regulated in this Pacific region,” says Wang, adding that the company hopes to become an example of a sustainable fishing fleet. 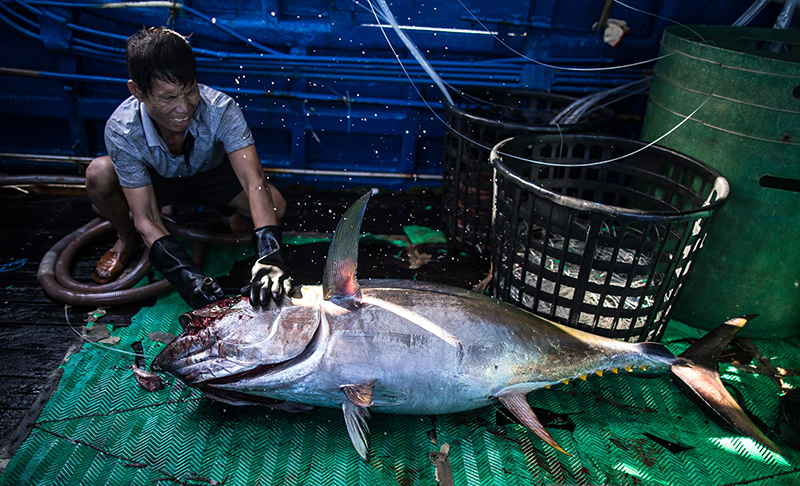 The Nature Conservancy says there are benefits to collaborating with such a big company. “Working with a large industry player creates the potential for successful research fishing results to be implemented at scale, on a voluntary basis, across the company’s regional operations quickly,” Zimring says.

A single hook and bait combination won’t necessarily benefit all species equally, Zimring cautions. But this experiment aims to help refine a tuna fishery to sharply reduce bycatch. When the research results come out early next year, Palau will know if it’s worked and whether to roll out changes across its longline industry.

The Pacific spans more than 60 million square miles, and its entire tuna industry is fraught with problems. The regional fisheries management organizations tasked with managing these fish stocks have come under fire for failing to do so. So while the Western and Central Pacific Fisheries Commission is required to manage the area’s tuna stocks, in recent years Palau has taken the helm on its own marine matters.

Driving these actions is the realization that tourism is far more valuable to Palau than dead fish.

“We feel in spite of what the data has told us, particularly for bigeye and Pacific bluefin numbers, the Western and Central Pacific Fisheries Commission has done very little to address the issues,” says Umiich Sengebau, Palau’s Minister for Natural Resources, Environment, and Tourism. In 2006, the government passed a law to ban bottom trawling in its waters, a destructive fishing method that rakes up the seafloor. The same year, it addressed shark bycatch by outlawing the use of steel wires in longlining fisheries and replacing them with monofilament lines, which are easier for unintentionally caught sharks to gnaw through and escape. Palau then created the world’s first shark sanctuary in 2009, which kept its waters off limits to shark fishing.

Last year, in its boldest marine conservation move to date, the government announced it would convert 80 percent of is maritime territory into a giant, protected reserve by 2020. Fishing and mining will be banned in this region, and closely managed fisheries will be permitted only in the remaining 20 percent of Palau’s Exclusive Economic Zone (EEZ).

The sanctuary is based on the Palauan concept of ‘bul,’ in which overfished reefs are closed off for replenishment. “All science points to our pelagic resources, especially tuna, as being depleted,” says Keobel Sakuma, executive director of Palau’s new marine sanctuary. “So instead of simply allowing more fishing in our EEZ, the people have decided to declare a bul on 80 percent of our EEZ. It really wasn’t a question of ‘Why should we do this?,’ but more a declaration of ‘How can we sit by and not do anything?’”

Driving these actions is the government’s realization that tourism is far more valuable to the country than dead fish. 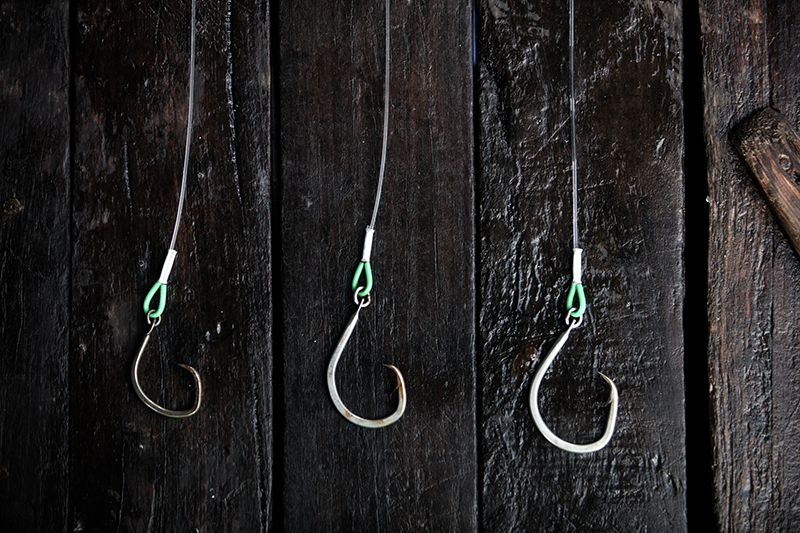 Tourism in the country has risen steadily in recent years, and today it accounts for roughly three-quarters of Palau’s economic growth. Tourists visiting the country specifically to dive in its biodiverse waters contribute $90 million annually — roughly 40 percent of the nation’s gross domestic product. By comparison, the fishing industry brings in just a fraction of that.

“Palau is marketing itself as a pristine paradise,” explains Sengebau, “and so we want an industry that is consistent with the kind of message we want to project to the rest of the world.”

The country’s president, Tommy Remengesau Jr., is often quoted explaining that a single shark generates more than $1 million during its lifetime via dive tourism. So when bycatch strips the pristine waters of these iconic species, it leaves a large economic hole.

A more sustainable tuna fishery also ultimately supports the goals of the marine sanctuary. If the fishing experiment shows good results, it will shape the regulations in the 20 percent of Palau’s EEZ that will be set aside as a fishing zone. Any vessels wishing to longline in this area may be required to use circle hooks of a particular size, to bait hooks with fish instead of squid, and to sink their lines at certain depths.

For a government with limited resources, enforcing these changes on vessels and safeguarding such a huge swath of ocean will be a challenge. But if fishermen comply, the tradeoff is that they could market their catch as the product of a progressive fishery, perhaps charging a premium for their catch. Vessels catching tuna in Palauan waters will also be required to land fish in Palau for processing and packaging, so that the country can generate as much revenue as possible from the fish before they are exported.

Conservationists hope the experiment will spread across the Pacific. Tuna are highly migratory species, and as other fisheries migrate along with them, bycatch will continue to occur in their wake.

With new marine protected areas and an emerging U.N. treaty, global ocean conservation efforts are on the verge of a major advance. But to enforce these ambitious initiatives, new satellite-based technologies and newly available online data must be harnessed. READ MORE

There are signs of change elsewhere. The Federated States of Micronesia have recently joined a Nature Conservancy project to improve surveillance and management in its fisheries, and Kiribati has created a huge marine reserve that is being monitored using satellite technology.

Palau’s leaders are hopeful. “If it works, and we can show it,” says Sengebau, the environment and tourism minister, “I think it’s going to be a game changer in this industry.”