For nearly four decades, every American president has promoted alternative fuel vehicles as a way to secure the country’s energy independence. Ronald Reagan backed the 1988 Alternative Motor Fuels Act, which championed development of non-petroleum fuels. George H.W. Bush helped shape the 1992 Energy Policy Act, whose goal was to displace 30 percent of U.S. transportation oil use by 2010. Bill Clinton ramped up those initiatives, launching the Clean Cities program to promote alternative fuels. George W. Bush gave particular support to hydrogen fuel cell vehicles and worked with Congress to create the Renewable Fuel Standard, which mandates a large increase in biofuel use that has now reached 16 billion gallons a year, mainly ethanol.

And President Obama — under the misguided presumption that alternative fuels emit significantly fewer greenhouse gases than gasoline, and goaded by green groups and alternative fuel business interests — has been a staunch proponent of alternative fuels and electric vehicles (EVs). The president’s first-term economic stimulus allocated an additional $300 million for alternative fuel vehicle deployment. His administration has enthusiastically promoted EVs, pledging to put a million electric vehicles on the road by 2015. Obama’s new climate plan, unveiled in June, calls for ongoing efforts to deploy biofuels, EVs, and hydrogen fuel cell cars.

Despite this bipartisan support stretching back almost 40 years, the fact is that using government mandates and subsidies to promote politically favored fuels du jour is a waste of taxpayers’ money. It’s also a diversion from what really needs to be done to reduce transportation-related greenhouse gas emissions. Examining alternative fuels as they are produced today, as opposed to how some people wish they’ll be produced in a hoped-for renewable energy future, reveals no environmentally persuasive reason to rush alternative fuel vehicles onto the road.

There is no environmentally persuasive reason to rush alternative fuel vehicles onto the road.

Instead, in order to reduce transportation-related greenhouse gas emissions, action is needed on three fronts: continuing to raise fuel efficiency standards, pursuing policies to reduce driving, and, most importantly, controlling carbon upstream in the energy and resource systems that supply the fuels used downstream in our everyday lives. 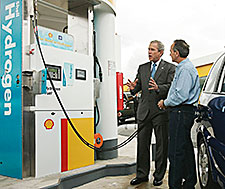 In the case of electric vehicles, an upstream focus means cutting CO2 emissions from power plants, as Obama has proposed in his new climate plan. Without low-carbon power generation, EVs will have little lasting value. Similarly, for biofuels such as ethanol, any potential climate benefit is entirely upstream on land where feedstocks are grown. Biofuels have no benefit downstream, where used as motor fuels, because their tailpipe CO2 emissions differ only trivially from those of gasoline.

Given how difficult the climate policy debate has been, it’s crucial to prioritize where our money, time, and attention are focused. Even if certain alternative fuel vehicle technologies (say EVs) may play an important role in the decades ahead, these technologies are unlikely to take the form being prematurely subsidized today. What’s at issue is not just the waste of tax dollars, but the squandering of public goodwill due to the hyping of alternatives.

Whether what propels a car is electricity, liquid fuels, natural gas, or hydrogen, the critical impacts all occur far from the car itself at locations where fuels originate and natural resources are exploited. Today, none of the relevant sectors — electric power generation, oil and gas supply, agriculture and land — are close to having their carbon impacts adequately managed.

Take electricity, for example. In the United States, most of it still comes from fossil fuels — 37 percent coal and 30 percent natural gas, as of last year. Recent shifts to natural gas have had only a modest effect; CO2 from electricity generation is declining, but slowly, at a projected rate of less than one percent per year. But thanks to stronger fuel economy standards pushed by the Obama administration, the CO2 emissions rate of U.S. automobiles is on track to decline by 2.1 percent a year, more than double the rate of reduction in the power sector.

Given the gains in gasoline vehicle efficiency, the climate benefits of electric vehicles will shrink unless more is done to reduce emissions when generating electricity. Because power plants are retired much more slowly than cars are scrapped, government spending to rush EVs onto the road and underwrite their infrastructure is not money well spent. By the time the power sector is clean enough and battery costs fall enough for EVs to cut carbon at a significant scale, self-driving cars and wireless charging will probably render today’s electric vehicle technologies obsolete. Accelerating power sector cleanup is far more important than plugging in the car fleet.

As for ethanol and other biofuels, a National Academy of Sciences report concluded that their climate benefits are highly uncertain. The study found that the Renewable Fuel Standard — now at 16 billion gallons and climbing — may not reduce greenhouse gas emissions at all once global impacts are counted. A pioneer in fuel cycle studies — Mark A. Delucchi of the University of California, Davis, Institute for Transportation Studies — now questions the accuracy of any of the greenhouse gas analyses used to promote biofuels.

In fact, biofuels have no climate benefit on the road, which is where they are burned. If there is a benefit, it happens on land and occurs only if harvesting biofuel feedstocks causes a net additional removal of carbon dioxide from the air. Take corn, which is the main feedstock for making ethanol. Growing the corn that becomes ethanol absorbs no more carbon from the air than the corn that goes into cattle feed or corn flakes. Burning the ethanol releases essentially the same amount of CO2 as burning gasoline. No less CO2 went into the air from the tailpipe; no more CO2 was removed from the air at the cornfield. So where’s the climate benefit?

Until that question can be carefully answered for fuel produced on a large, commercial scale — as opposed to limited and costly experimental methods — it is not possible to scientifically determine the extent to which biofuels actually benefit the climate. The implication? We need to ensure that biomass feedstocks really do absorb more CO2 than whatever else might be growing on the land. For now, it makes more sense to soak up CO2 through reforestation and redouble efforts to protect forests rather than producing biofuels, which puts carbon-rich natural lands at risk.

As for hydrogen fuel cell cars, the benefits depend on low greenhouse gas hydrogen production. Today, hydrogen is produced from natural gas or during petroleum refining, and commercially available hydrogen involves about 35 percent more greenhouse gas emissions per unit of energy than gasoline. Hydrogen fuel cell cars are more efficient than today’s gasoline cars, but their ultimate value depends on extensive changes upstream in the industrial sectors where hydrogen is generated.

Whatever fuel is considered, the real need is to limit the greenhouse gas emissions that now remain largely uncontrolled in the sectors from which fuels are sourced. This conclusion is based on a detailed analysis that works forward from present realities rather than backward from one imaginary future or another. Although one or more alternative fuels might have a role to play someday, which alternatives will be needed, and when, cannot be determined on the basis of current data. It’s also quite possible that none will be relevant in the forms that alternative fuel vehicles are being promoted today. Moreover, given the poor track record of alternative fuels to date, there’s no need to saddle climate policy with this legacy of disco-era, “anything but oil” energy policy.